PAUL ELLIOTT
For a REAL old-school feel, how about these cool Outworld ASCII subsector maps created by the talented Omer Golan!

THE SHOULDER OF ORION 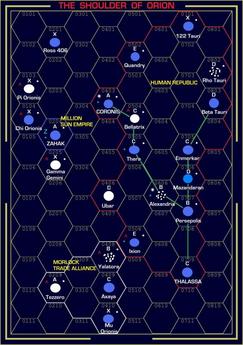 The Shoulder of Orion is my single sub-sector setting for Classic Traveller, it is the Traveller universe I always wanted to create when I was younger, but just didn't have the knowledge or the  stamina to create. But now, it is done! A pocket of humans, exiles from a doomed Earth light years from home, trying to protect themselves from alien cultures all around. The Human Republic is inward looking, militaristic and paranoid. The Morlocks are post-apocalyptic Darrians that look like Mind Flayers, the Gukamatz of the Million Sun Empire are intelligent raptors, descendents of Earth's troodont dinosaur population, and the Gorgons are gas giant flyers, intelligent creatures creating crystalline ships, who resemble the Jgd from an issue of the Journal. Artificially intelligent mechanoids, the Assemblers, who seem to ignore human presence do on occassion cause a problem, these AI fleets are the remnants of the old Human Republic robot war fleet that tried to stop the Gukamatz invasion.

Mankind remains hemmed in and paranoid.

Here is my own Classic Traveller Rules Companion with minor tweaks to the rules to speed play, along with my fast-play vehicle damage rule and a fast-play space combat rule that involves a handful of player character task rolls and that's it. There's also a couple of notes on skills and skill selection. Everything's done to speed things up even more.... it won't be to everyone's taste, but it tries to change as little as possible, whilst retaining the free-wheeling spirit of Classic Traveller.

My own solo rules for playing Classic Traveller. It involves some worldbuilding, but also the creation of a group of player characters that meet patrons and take on missions. It is set out as a procedure that is followed step by step, alternating between an episode of worldbuilding and episodes of character-driven play. Suitable for long term play!

Traveller Book 5 has a wonderful system for creating a 'lifepath' for naval characters. It is a game in itself. and easily adapted to the Star Trek universe. The advantage of setting High Guard's character generation system in Starfleet is that the players can picture ships, staterooms, uniforms, ranks even the academy itself.

Trying to get a handle on what these tech levels are like in practice ...

UNIFORMS IN THE THIRD IMPERIUM